For a lot of twinning organisations, one of the most persistent challenges is getting younger people involved. Many twinnings began in the early 1980s and too often, the founder members cling onto the executive without introducing fresh blood into the association. 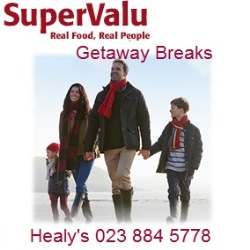 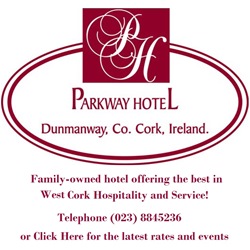 In the case of the association between Dunmanway and the Morbihan town of Quéven, that has not been the case. In fact, the original members of the twinning committee resigned en bloc three years ago to make way for the next generation coming through. Today, the association is driven by youthful involvement revolving around sport and the very beginnings of the association go back to a primary school initiative, as twinning association treasurer Stephen Daly explains:

“Groups went over from the local school here with a teacher called Celine O’Sullivan, so there were two groups that went over before any official charter was signed.”

In 1987, the charter was duly signed and the arrangement began in earnest, with Tom O’Neill, Nellie O’Donovan and Liam Cotter being three of the main committee members at the initial stage.

Music has always been at the heart of the exchanges and the first official group that went over to Brittany was a representation of Comhaltas Ceoltóirí Éireann.

“About 18 months later, a few families went over… just to get to know people better.” The following year, a group from Quéven returned the compliment and there followed what Stephen describes as a quiet period of a few years with very little activity.

Then, in 1995, there was another group visit to Quéven. This time, they tried something new and went over on a golfing trip.

“I wouldn’t have thought of driving in France 10 years ago but it’s second nature to me now.” Dunmanway-Quéven Twinning treasurer Stephen Daly stands before the framed signed twinning charter

“Basically, we were trying to get the thing kick-started again,” recalls Stephen. Even today, after years of a surge in interest in golfing in France, the sport is far more of an elitist activity than it is in Ireland and at that time in the mid-1990s, golf players in France were very much in the minority.

But the unusual approach paid off. The famous Festival Interceltique in Lorient (“only a stone’s throw away from Quéven”) had started a pro-amateur golf tournament in 1994 and the Dunmanway idea fitted in nicely with all of that.

Since then, the Dunmanway side has sent at least one (and sometimes two) pro-am golf team to Brittany every August. This has meant that members of the twinning committee physically meet one another on an annual basis on the golf course at the very least, if not at an official twinning event too.

The golfing element has kept the movement youthful too. On the first golf outing to Brittany, there was only a small grouping, including Stephen’s son Daniel, who was 16 at the time.

“He’s 23 now,” says Stephen. “As he went along, he started bringing friends with him and I started getting a younger group playing golf. Last year, I’d safely say that 60-70% of the group were younger people. It’s even worrying the French because they don’t have the same age profile.”

Through the music, however (the other main pillar of the association), there was an increase in youthful involvement in this year’s exchange event in Brittany, most of whom will be coming over on a return trip in 2015.

This year too, there was a presidential visit as Michael D Higgins graced the Year of the Irish with his presence in August.

“He came in to visit our stand in the main tent at the festival this year… It was great. We brought out paintings, crafts and local produce and we sold it over there too. This year was one of the best ones, I would say.”

Travel arrangements for the golfing visits are paid for individually by the members of the twinning association, but once over there, people are accommodated and the golfing tournament budget is looked after on the French side too.

For the visits from France, the necessary hospitality budget is raised through fundraising activities and between now and May of next year, there will be various events going on, according to Stephen and secretary Norma Wilson, such as table quizzes, family bingo, a coffee morning and raffles.

The local business community is always very generous, Stephen says: something that has been the case through both the lean and the prosperous times. These days, there is a bounce in the step of Dunmanway’s commercial life as the presence of a number of supermarkets has attracted a wider reach of shoppers to the famous market town.

On the French side, the growth of the town has been exponential since the twinning charter was first signed. The position of Quéven as a satellite town of Lorient has seen it increase on a scale that wasn’t possible in the case of its Irish twin and Quéven is now about ten times the size of Dunmanway. The budget on the French side is far greater too, something that makes the success from the Irish side in this case all the more remarkable.

Stephen feels that there is an astonishing lack of communication between the twinning arrangements in Ireland and would welcome an All-Ireland twinning federation in some form. As an example, he mentions the fact that another twinned town from the western side of Cork – Carrigaline – has an ongoing arrangement with a Breton town only 7km from Quéven. Yet it was only by meeting at the pan-Celtic Festival in Lorient that they knew of one another’s existence.

In the meantime, the twinning association will continue and Stephen feels that this is important.

“I think that it’s important bBecause I can see it even in my own son: the first year, we went over there, he wouldn’t touch the food there… didn’t want to go near it; he was a plain-food man. Now, he’ll try anything.

“It broadens peoples minds – especially young people – going to experience a different culture… that’s important, and you have to go there to experience it. For example, I wouldn’t have thought of driving in France 10 years ago but it’s second nature to me now.”

As for language exchange, Stephen admits that despite having taken classes over the years, he hasn’t mastered French to any impressive degree yet (“I’ve the basis but I couldn’t have a conversation”), but that’s no barrier to communication:

“The family I’ve been staying with when I go over there for the last 10 years don’t speak English and I’ve very little French but we still get on fine!”

(Below: an extract from the celebrations in Brittany to mark the 25th anniversary of the Dunmanway/Quéven Twinning. Bottom: The Tootlafrance Twinning Map, showing all the French towns twinned with towns in Ireland)